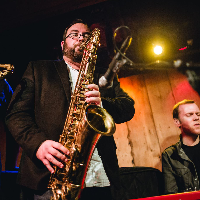 Michael Eaton (b. 1981) is a Brooklyn, NY based saxophonist, composer, and educator. As a saxophonist and improvising artist, his professional career to date has spanned a variety of idioms, encompassing jazz, free improvised music, soul, rock, western classical, funk, reggae, brass bands, and beyond. He embraces a progressive and holistic vision of jazz, cognizant of its rich history and development, but reaches for a personal outlook with an eye towards future possibilities.

Michael leads Individuation, an ensemble which combines aspects of postminimalism, world rhythms, and free improvisation with modern jazz. Their latest album is Dialogical, released May 3, 2019 on Destiny Records. Dialogical centers around the themes of dialogical thinking and interconnections between a multiplicity of styles and musicians. JazzTimes writes "'Serious play' may be a cliché by now, but it exemplifies the spirit that dances through this set," and AllAboutJazz says "There is more than enough promising music on Dialogical to justify Eaton's status as a force to be reckoned with in today's jazz world." The recording is made up of all original compositions and improvisations with a stellar cast of musicians, plus a very special guest artist, Lionel Loueke (guitar and vocals).

Michael's 2014 debut album on Destiny, Individuation, highlights original music performed by the quartet along with trumpeter Jon Crowley. Individuation combines angular themes and propulsive modern jazz with intricate minimalistic vamps, freebop, John Cageian prepared piano, and multi-layered platforms. The band is joined on several cuts by a very special guest, NEA Jazz Master and saxophonist David Liebman. Scott Yanow (All Music Guide, Downbeat) calls Individuation a "rather impressive debut, the start of what will surely be a very significant solo career", and Vitto Lo Conte writes in Music Zoom that it signifies "a great debut album of a saxophonist and a quartet who seem to have all it takes to get noticed in the world of contemporary jazz".