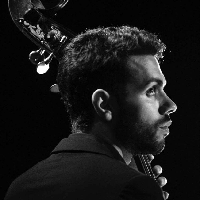 Hi! I'm an Electric/Acoustic Bass player from Italy. Initially trained as a classical musician, I mixed my classical technique with my love for play and transcribe every kind of music that can be enriched with my low (or super high! Ha!)frequencies.

With the musical dream still very present, he invested some time in formal academic education, in hopes of acquiring essential tools and resources to grow in his area of specialty. He studied Jazz Electric Bass, Classical, and Jazz Double Bass in Palermo Conservatory for six years with some of the most renowned Jazz and Classical musicians in Italy and Europe.

Once this was over, he pursued his own way by self-learning and exploring new realms in Europe. During this transition time, he had the honour to perform with highly respected musicians such as Peter Erskine, Gianluigi Trovesi, Gregg Field, Bobby Watson, Dorado Schmitt, Samson Schmitt, Monica Mancini, Orazio Maugeri, Daniele Roccato, Adam Rudolph, Marcello Pellitteri, Mark Dresser, Sebastian Gramms, Barre Philips and more.

As of 2015, his musical career experienced professional stability, collaborating with several ensembles and musicians. The current list of repertoires thus far includes:

He shortly enrolled once again to formal education, in hopes of widening his horizons. He is currently a post-graduate student, possessing two Electric Bass Degrees (Bachelors and Master) with honors. During this time, he had the opportunity to work on an experimental final thesis, focusing on music for six-string electric bass. The final result of this project was a first national integral execution of Concerto for Jazz Bass and Orchestra (J. Beal), a written concert for Solo Acoustic and Electric Bass, Rhythm Section and Orchestra.

At the moment, he is enrolled in yet another Jazz Double Bass degree in Denmark (enter the University name here) with Torben Bjørnskv (a former student of Niels Henning Ørsted Pedersen).