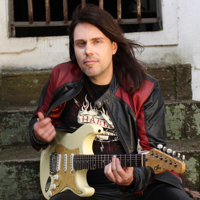 Born and raised in the suburbs of Brussels, Belgium, Xavier Cevrin picked up the guitar at the age of twelve and never put it down since, or maybe just to catch some sleep at times. His influences run from Jimi Hendrix to Buddy Guy, Stevie Ray Vaughan, David Gilmour, or Scott Henderson to list only a few.

He headed up to Los Angeles in 1991 with a dream to become a professional musician, as well as to further his musical education. He graduated from Musician's Institute (GIT) with a diploma in Professional Contemporary Guitar and from UCLA Extension in Songwriting, Music Production and the Music Business. He was also very fortunate to have been able to sit in sessions with great musicians such as Gregg and Matt Bissonette (Joe Satriani, Toto, David Lee Roth, etc.), Keith Barrows (Nancy Sinatra, etc), Bob Daisley (Rainbow, Gary Moore, etc.), the late surf guitar legend Jerry Cole (The Champs, The Beach Boys, etc.), and others. After touring for a few years with a Gospel Production all over the East and West coasts, he settled in Brussels, Belgium, Europe's beloved capital in the fall of 2003.
Over the years he's been involved in various Tribute projects featuring the music of Aretha Franklin, Pink Floyd, Supertramp, the trio TRITENSE (A Tribute to Guitar Legends) as well as his own blues-rock band CEVRIN DREISER with fellow musician and long time friend Chris Dreiser. They could have literally named the band "Brothers", but it was already taken. He is also known and sought after in the studio for his tight funky rhythm skills and colorful playing that just suits the song. He collaborates extensively with hit record producer Michel Bellens from the mythic Belgian Label GUN RECORDS, with credits as an arranger, session guitarist and lyricist/composer.
​
He is also active on the German scene with the rock band Pigwell and in Colombia with The Seventh Sense, an electrified latin jazz/blues/rock band alongside Colombian guitarist Fabian Diaz. He heads up and teaches regularly at his own music school, Guitar Mania, based in Brussels and Waterloo, Belgium and hosts Guitar Workshops with L'Ecole du Rock, also based in Waterloo, Belgium.
​
Guitar Workshops are now also occasionally held in Medellin, Colombia, as a guest with local guitarist Ed Lozano originally from New York. If you're lucky you'll also catch the two firing up some blues jams at the Hard Rock Café or other mythical live music joints in Medellin with The Big Bones.

Since June 2019 Xavier is also active as a music producer and is currently working on a debut EP for Malek Hanna, a very gifted singer from Los Angeles, CA.