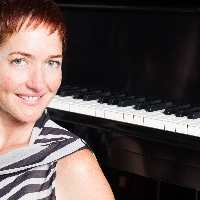 For two decades, Rebecca Cline has lived in Boston as an educator, presenter, and performer specializing in Latin and jazz piano. As the author of Latin Jazz Piano Improvisation: Clave, Comping, and Soloing on Berklee Press, she has led over twenty workshops in the US, Asia, Europe, South America and the Caribbean on improvising within the context of the clave and on Cuban piano improvisation styles. She has taught ensembles, Cuban piano styles, and jazz studies to undergraduate students for 17 years at Berklee College of Music for seventeen years.

Ms. Cline has had the opportunity to study music in a variety of settings abroad. In 1993, she conducted original research in and around Manaus, Brazil in support of an honors thesis entitled The Festival do Boi-Bumba: Whose Festival?, which explored questions of cultural identity and indigenous rights in the context of the fraught song competition associated with the festival that year. In 1995, she moved to Puerto Rico in order to experience and study the “salsa” dance music that offered an entirely different role for the piano than the classical music she had studied since early childhood. That same year, she seized an opportunity to study folkloric percussion and dance at the National Art School for Music in Havana. Transfixed by the unparalleled work ethic and consequent virtuosity of musicians on the island, she arranged to return the following year for private studies with the great pianist and bandleader, Jesús “Chucho” Valdés.

Ms. Cline continued to study, and eventually perform, Cuban and Puerto Rican music in the Caribbean for several more years before returning to the U.S. Realizing that the music of her inspiration (Irakere, Gonzalo Rubalcaba) also borrowed heavily from the tradition of North American jazz, she spent much of that time studying jazz vocabulary. Her education was greatly supplemented by attending weekly performances by Jerry González, often with his brother, Andy, on bass, at Café Matisse in San Juan. Jerry mentored her and eventually hired her for local quintet gigs, sometimes offering severe yet priceless feedback. An invigorating four-day workshop led by a group of inspiring educators from Berklee College of Music in Puerto Rico ultimately lured her to Boston.

As a student at Berklee, Rebecca joined the small, yet industrious, community of Boston musicians who performed Latin dance music, providing an opportunity to develop what she had learned in Puerto Rico and Cuba. Shortly after joining the faculty at Berklee, she returned to San Juan for a memorable trio concert with Giovanni Hidalgo and Polito Huerta at the Nuyorican Café. In Boston, together with co-leader Hilary Noble (sax, percussion), she formed Enclave, a quartet that performed original material that sought to build on the tradition laid primarily by the Fort Apache Band, led by Jerry González. After releasing two CDs, Enclave and Diaspora, Ms. Cline went on to form the dance band, Obbini Tumbao, with co-leader Anita Quinto on timbales. In Caracas, Venezuela, Obbini Tumbao recorded Llegó La Hora on Cacao Música, with Pedrito Martínez on vocals and congas.

Ms. Cline joined the Cuban-influenced Latin-pop band, Mango Blue, led by Alex Alvear, in 2006, and recorded Mango in 2009. In addition, she has collaborated with many Boston-based groups on performances and recordings, and for the past decade has focused primarily on performing with the Rebecca Cline Trio. Ms. Cline holds a Bachelor of Arts in Latin American Studies, with a Minor in Music, from UNC-Chapel Hill, and a Bachelor of Music in Professional Music from Berklee College of Music.