Posted by Corey Richardson on February 18, 2020 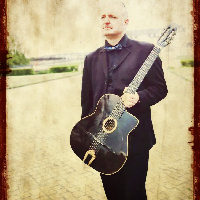 The second entry in our “Featured transcriber” series is an interview with Lars Petzold-Turcanu of Bonn, Germany. Lars has been sharing transcriptions on his Soundslice channel for about a year — just over 160 slices at this point. He’s built up a nice following and has become one of our favorite transcribers. 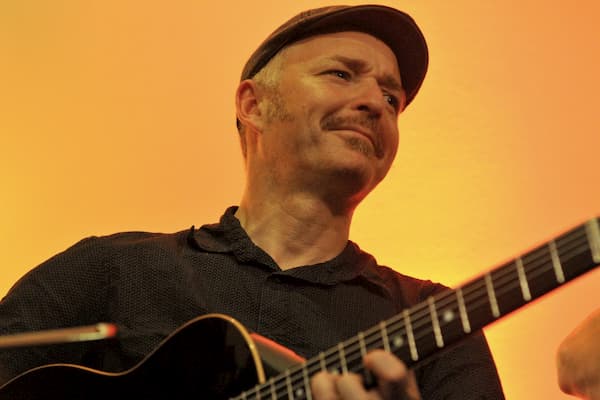 Lars’ transcriptions tend to feature extremely complicated guitar playing, often in the jazz and gypsy jazz genres. He dives deep into rare performance videos from artists that we love (e.g., George Benson and Adrien Moignard), and he occasionally posts more than one detailed transcription in a single day! How does he do it? We ask this and more in our newest “Featured transcriber” interview.

Soundslice: Lars, thank you for being the second guest in our “Featured transcriber” series. We get very excited whenever you post something new, and I bet we’re not the only ones.

Lars: Many thanks for your interest. I’m glad that Soundslice is out there, not only because it makes transcribing so easy, but also because there is now a kind of online community for nerds like me.

Soundslice: Would you tell us a bit about your musical background?

Lars: My name is Lars Petzold-Turcanu and I am 47 years old. I taught myself to play the guitar when I was about 10. My first interests were country, blues and ragtime. Early blues artists like Blind Blake and Big Bill Broonzy caught my ear at first, and then I went on to the more psychedelic Jimi Hendrix and Tom Waits. But my love for jazz was sealed after I heard a radio program that featured Wes Montgomery.

As a player, I’ve been in different formations. The most well-known was with a nu-jazz ensemble called “Greenfish,” which secured a contract with the German jazz label Enja Records. We recorded an album and toured various festivals. I began studying jazz seriously, but once my civil service was complete, I came to my real vocation: special education.

I confess this change was good for me, as I do not like to travel or sleep in hotels. :)

When it comes to my studies on the guitar, I learned to play classical — which has always fascinated me. Some time later, I explored flamenco and dance accompaniment, and then more exotic folk music of Russia and Romania. All of this is to say transcribing has always been a part of me. In colloquial German, we say “raushören” — something like: “I’m digging things up by listening.”

Soundslice: That’s a very interesting path. So these days, do you mostly transcribe, or do you play out a bit?

Lars: I do about twenty concerts a year — just the things I really like to do. It’s quite compatible with family and job life. [Pictured below, Lars with his gypsy jazz group, Café Gitan.] 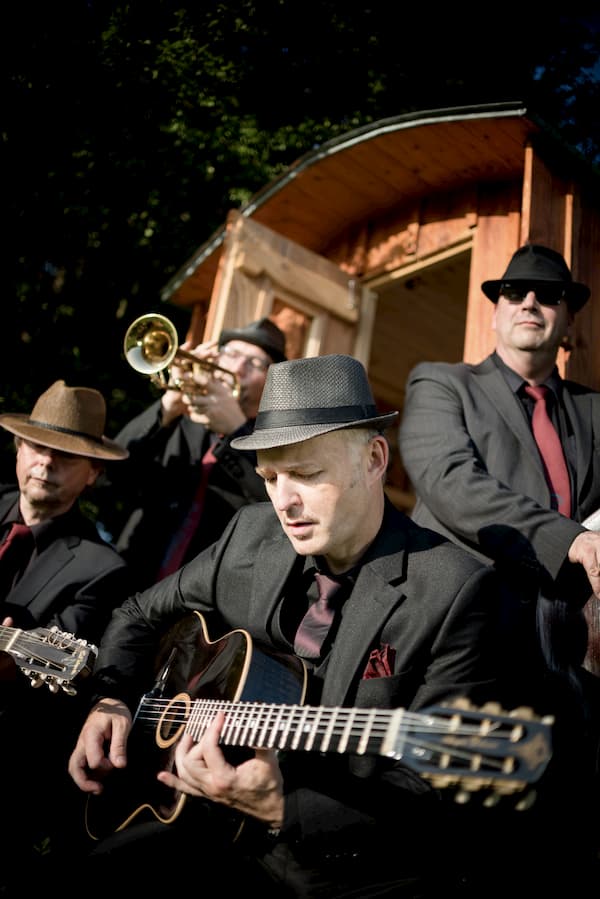 Soundslice: That sounds nice. :) So what’s the live music scene like where you live?

Lars: Very diverse. In Bonn and Cologne, we have a lot of regular live music, festivals and international concerts. In Cologne in particular, there is a lively session scene. You’ll find regular musical gatherings for gypsy jazz, jazz, bluegrass, Irish-folk, etc. Some great musicians come here from the surrounding area. You never get bored.

Soundslice: Your Soundslice profile says that you’re an aspiring violinist. Is this a new pursuit?

Lars: My first wish as a child was to play the violin. But it was too expensive for a working-class family. I eventually got a used “guitar.” When my son was born 4 years ago, I fulfilled my wish and got myself a violin.

I wrote a piece for him which is published on the album of my band Café Gitane. A very good friend named Frank Brempel played the violin part. I practice it and hope to play it as beautifully to my son. Maybe I should share the sheet one day here on Soundslice?

Update April 15, 2020: Lars did end up making a slice for this lovely composition.

Soundslice: That’s a good idea. Do you play the violin at any of these sessions you mention? 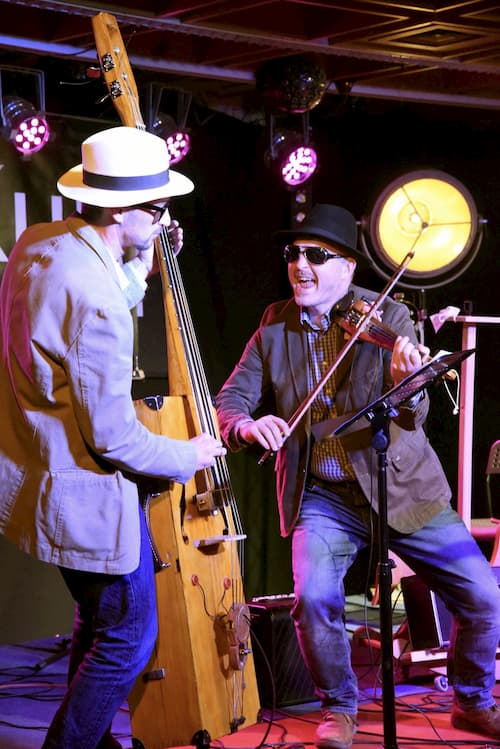 Lars: Yes, I play it at gypsy jazz sessions where I can already keep my head above water — I also play fiddle in a folk/bluegrass band. I am a dilettante and I enjoy it.

Soundslice: That description is overly humble! You have so many great transcriptions on your profile and you are clearly putting in quite a bit of work. Have you always transcribed this much? (Before starting to use Soundslice.)

Lars: Yes. I never had any lessons when I was a child, so it all started for me with listening to records and tapes. At first I’d learn the music by ear and wouldn’t write it down; that progressed and I started putting tabs in arithmetic books. Bit by bit, it became a little obsession. Maybe not a little one.

Soundslice: So it was really your whole education. What motivates you to keep transcribing at this point?

Lars: First of all, it is a very relaxing activity for me. I really get into it — like someone might enjoy watching TV. I want to understand how something works. What did Coltrane or Björk think? How does flamenco work? What typical fingerings do Allan Holdsworth, George Benson, Wes or Django use? Something like that — it’s endless!

My big question with the guitar is: “Where did who get which ideas?”

Soundslice: You mean, when you hear someone playing a musical idea, you want to see if you recognize it from another player?

Lars: Yes! I think of it in the form a family tree of ideas. I love that. 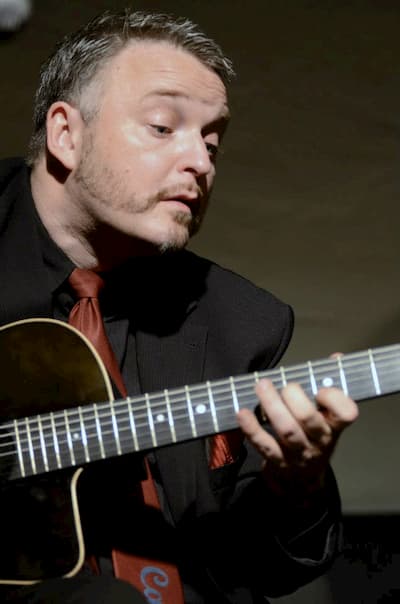 Soundslice: You transcribe so many technically difficult passages, so we’re curious: What’s your transcription process like?

Does that answer your question? Maybe you can give me an example of what you mean by technically difficult? Then maybe I can answer it better.

Soundslice Well, it’s admittedly an objective statement that something is technically difficult. :) But for example, the triplet passage in this transcription you made of Bireli playing “Hungaria” (starting at bar 89) just sounds so hard to parse — like a swarm of bees! Is it hard for you to figure that out?

Lars: No. That’s an easy one. This one, for example, was way more difficult:

The beat is slow, and the lines just sort of float. You don’t see the problems when you look at the completed slice, but the rhythms were very hard to figure out. Of course, when the sound quality gets worse, or the rhythm section starts to play their own rhythms that go against the soloist, it’s really hard to concentrate on what’s going on.

There are always a few slices that I’m working on at any given time. When the concentration leaves me on one, I switch to another. I eventually come back and finish where I left off. The most difficult ones take the longest time. For example I’m working on this one right now, and it’s going to be a while.

Soundslice: So when you have one of those challenging ones, is it important that you see the fingerboard of the player, or are you listening more?

Lars: I’m definitely listening more. Seeing does help to get to the bottom of the fingerings, which helps you to understand the player’s idiosyncrasies and how they organize the fretboard. That understanding is the crucial step that helps you better understand how he or she came up with their ideas. From there, you can derive things for your own playing.

Soundslice: We see a lot of George Benson and Adrien Moignard on your channel. Do you have an all-time favorite solo from either of them?

Lars: I transcribe so much Benson because I wanted to understand how he organized his game. I had this experience about a year ago where I was at a gypsy jam and all the tunes were up-tempo. I hadn’t played guitar for a while, so I struggled to keep up. I thought, “I have to practice again,” so I took George Benson on.

He’s kind of the source — he influenced all the other virtuoso guitarists (e.g., Bireli Lagrene and Adrien Moignard.) What I find fascinating, is that in addition to Wes, you can also find influences from Django and Hank Garland in George Benson’s playing.

Soundslice: Yes! In his biography, he also mentions the heavy influence of Charlie Christian. So what about some of your favorite transcriptions?

Lars: An absolute top solo on my channel is Wes’s “Take the A-Train.”

From the gypsy area, the solo of Kussi Weiss on “Einsam werden du sein” is beautiful and touching.

Soundslice: That’s plenty for anyone new to your transcriptions to dig into. Do you have favorite licks or passages from any of them?

Lars: With “A-Train" by Wes, the whole solo is a masterpiece. You can’t do better than that. On “Seven Comes Eleven”, it’s the part where Benson quotes Hank Garland. It starts on bar 103. Somehow I find it difficult to name a singular favorite passage.

Soundslice: What do you do with a transcription when you’re finished with it?

Lars: That varies. I have created two lists of ideas from my Soundslice transcriptions: one of which is filled with passages that I practice, the other simply a list of musical ideas that I’m inspired by. Both are constantly being expanded. 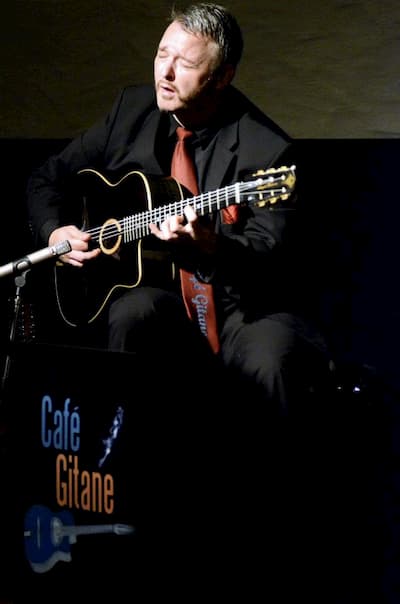 Soundslice: Speaking of inspiration, are there any guitar players you’ve recently found out about that excite you?

Lars: Yeah, lots and lots. That’s the great thing about this community: you discover something new more often. For example, here I learned about John Wheatcroft, Guillaume Muschalle and Isaac Negrene. But I also find myself re-inspired by old things I’ve heard before. Like this beautiful recording of Teddy Bunn and Hadda Brooks.

Soundslice: Last question: do you have a dream Soundslice feature that we might build? :)

Lars: Well, there are ideas. An EQ function would be good for technically bad recordings. I’ve been killing myself for months over that “Cherokee” solo from Wes that I mentioned earlier. You can barely hear the guitar.

A DM function to communicate with other musicians would be great, and so would the ability to back up YouTube recordings. (Unfortunately I’ve lost some work that’s been removed!)

But I think Soundslice is already great as it is. Really, really great work.

Soundslice: Those are good ones! Sorry to hear that you’ve lost a YouTube recording. :(

Well, Lars, thank you yet again! We appreciate you taking the time to talk to us, and we definitely appreciate all the work you put into making these fantastic transcriptions. We look forward to many more!

Lars: Thank you very much for your interest! I am looking forward to a lively, nerdy exchange in this community. All the best to you!

lucky1950
Very interesting interview, many thanks!