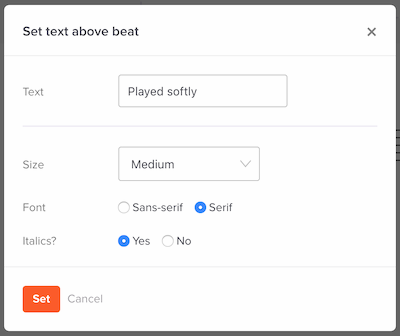 Here’s a powerful new feature for those of you creating slices. We call it “passages.”

It’s a way for you to tell Soundslice that a specific bar in your slice starts a new musical idea — a new passage. With this information, our engine will optimize the visual layout accordingly, making it look better and easier to follow.

Historically, Soundslice has used responsive notation — automatically determining layout from the width of your screen and your current zoom level. This is generally nice, especially on tablets and smartphones, but it also means that line breaks can happen in inconvenient places, making the music harder to read than it needs to be.

For example, consider a slice that consists of three scales. At a certain screen width and zoom level, it might appear like this:

It’s slightly awkward that the melodic minor scale gets split over two staves while the other scales don’t. :-/

Passages to the rescue. Using our notation editor’s new passage feature, you can mark each of those scales as a separate passage. That results in the following: 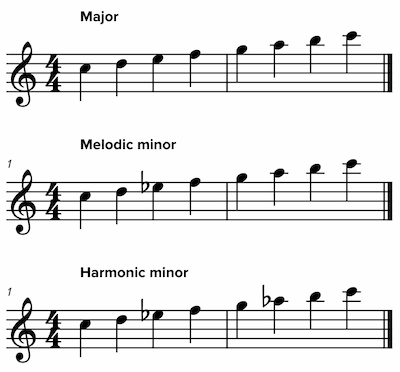 Much clearer and easier to follow! If you’d like to compare for yourself, here are two live examples: without passages and with passages.

When you mark a bar as “starts new passage,” here’s specifically what changes in your slice:

(Have ideas about other things we can do for new passages? Let us know in the comments below.)

With all of that said, how do you actually use this feature in your slices? In our notation editor’s Bar menu, look for the new “Toggle new passage” button: 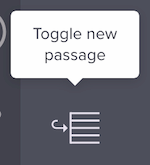 This will tell Soundslice to treat your selected bar as a new passage (or toggle it off, if it already starts a passage). Easy!

We hope you enjoy this new feature.

Improvements to slides in tablature

We’ve made two improvements to the way we display slides in tablature — that is, slides from one note to the next, as done on a guitar.

First, we now draw a slur over slides in tablature. This makes slides easier to read at a glance, it’s consistent with how we treat hammer-ons and pull-offs, and it brings our behavior in line with what people expect from other tab programs. 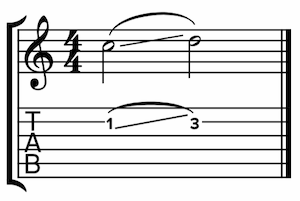 Note we were already displaying slurs over slides in standard notation. Today’s change makes the tab consistent with the notation.

Second, we’ve added support for a second type of slide: one that doesn’t use a slur. Our notation editor now lets you create both of these types of slides. (Previously it only let you create slides with slurs.)

Here’s what the buttons look like in our editor:

Finally, here’s how we’re handling all existing slides on Soundslice:

If you’d like to tweak the slides in any of your slices, it’s super easy — just open our editor, select the note and hit the appropriate slide button in our editor panel.

Previously, if you wanted to create a second voice in a given bar, you had to explicitly click the “Add voice” button. Our editor’s Voices menu — where you switch between voices — would only show the numbers for the voices that existed in the selected bar. And if you wanted to clear a voice, you had to click “Delete voice.” 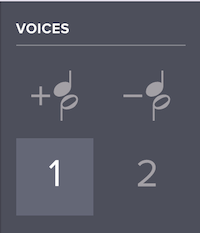 Now, it’s much simpler. The Voices menu always shows numbers 1 through 4, and we’ve removed the “Add voice” and “Delete button” buttons. To write in a voice, just select the voice number and start entering notes. 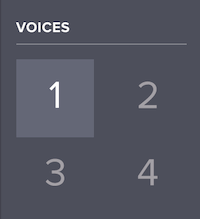 We’ve also fixed a related annoyance when moving between bars. Previously, if you were in voice 2-4 and clicked into a bar that didn’t have that voice defined, we would automatically create the new voice, with a single rest. This was annoying if you inadvertently clicked on a bar without meaning to create a new voice!

Now, if you click into a bar that doesn’t have the current voice defined, we’ll still create a rest — but it will be a “temporary” voice. If you then navigate to another bar (or voice) without having entered any notes, we’ll immediately delete that temporary voice. This is much nicer, and it means you don’t need to worry about creating random voices all over the place.

Finally, there are two other changes as part of this:

You can finally add and remove hairpins — aka crescendo or decrescendo markings — in the Soundslice notation editor.

Previously, we only supported hairpins if you happened to import a MusicXML file that already had them defined. Now, you can create and remove them directly within our editor.

Use these two new buttons in our editor’s “More notations” menu: 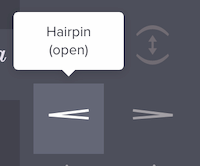 To create a hairpin, select a bunch of notes and click the appropriate button to specify a crescendo or decrescendo. That’s it!

While we were at it, we improved the way we display hairpins. If a hairpin is split across multiple staves, then we’ll now make sure that the hairpin isn’t fully closed at the stave break. Here’s a before-and-after:

It’s subtle change that communicates the intent of the hairpin more clearly.

Over the past month, we’ve rolled out several improvements to how our music looks — plus some new functionality in our notation editor. Here’s an overview.

Our system has always used built-in rules to determine whether slurs should be displayed above or below a staff.

Now, you can manually override our automatic positioning. Use the new “Toggle slur side” button in our notation editor.

You can also assign a custom keyboard shortcut for this, if you’d like.

Relatedly, we now preserve the slur position for any music you import from MusicXML files going forward. (Previously, we ignored that information.)

Previously, in music with multiple voices, our rendering engine was quite naive about accidentals, resulting in ugly clashes like this:

Now, we take multiple voices into account when positioning accidentals, to ensure they don’t collide:

On a similar note, our rendering engine is now smarter about whether an accidental is strictly necessary in a multiple-voice context.

In this example, the second A♭ isn’t necessary, because it’s already been made active by the first note in the bar:

That’s how we used to render it, because our algorithm for accidentals didn’t properly take multiple voices into account. Now, we do the right thing and hide that second accidental:

Of course, you can still manually display the accidental if you’d like. Which brings us to...

Previously, our system would only display an accidental if it was absolutely necessary, or if you specified a cautionary accidental within parentheses. Now, you have the ability to force the display of any accidental.

To do this, just highlight the note in our notation editor and click one of the accidental buttons.

In addition, we’ll now detect forced accidentals for any music you import from MusicXML going forward.

We now display a cautionary time signature at the end of a stave, if the first bar in the next stave has a different time signature: 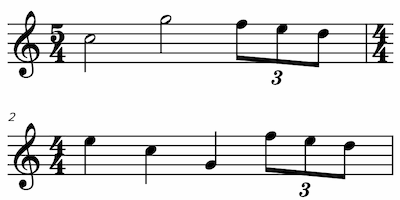 Note that our system lays out notation according to your device’s screen size and your current zoom level — so cautionary time signatures will appear automatically when the situation presents itself.

Right on the heels of our recent notation engine improvements, here’s a nice new way of formatting text within your slices.

Previously, we only supported “text above” and “text below,” which look like this:

This type of text always gets its own dedicated margin — which, in practice, means it can be quite far from the notes it’s describing. It works well for high-level descriptions of music but not well for performance instructions and expressions such as accel.

Now, we support a second type of text — expression text — which is positioned much closer to the associated note.

You can place it either above or below notes, and it can be optionally italicized (a longtime convention for expression text).

To create this type of text, use the new “expression” buttons in our notation editor (documented here). We’ve also updated our MusicXML importer to use that style of text when appropriate.

Customize bar numbering in your slices

Here’s a new feature that several people have requested: you can now customize bar numbering in your slices.

Before this change, bar numbering in Soundslice was simple and “dumb.” The first bar was labeled as number 1, and the number increased by one for each subsequent bar. There was no way to change that.

Now, you can use our notation editor to override the bar numbers however you’d like. For example, you might want to:

Here’s an example of the second idea:

If you’ve overridden a bar number, all subsequent bars will be labeled relative to your override — so you only need to override one bar. For example, if you change the first bar’s number to “9,” the second bar will automatically be labeled as bar 10, and so on, without you needing to override the subsequent bars.

If you’ve overridden a bar number, the number will always be displayed in notation. Otherwise, we only render bar numbers for the first bar in each stave. Eventually we plan to add a “Display bar number for each bar” setting.