Here’s what we’ve launched and tweaked recently. There’s something for everybody in here!

Since launching a touchscreen editing interface last month, we’ve gotten good feedback from musicians actually using it. We’re following up with some improvements directly based on that. Can you spot the differences in this new screenshot?

First, we’ve made the piano keys function as a toggle. If a note is selected and already exists in your notation, you can tap it in the piano keyboard (or fretboard) to remove the note. This feels really intuitive and was suggested by a few users.

Second, we added an “Auto-advance” button. Click that to enable auto-advance mode, which will automatically advance the cursor each time you enter a note. Handy for quick entry of single-note lines.

Third, we removed chord mode. It no longer felt necessary due to the previous two changes.

Fourth, we removed the up/down arrow buttons, to make the interface less cluttered. Those arrows weren’t really useful, as you can simply tap on the keyboard or fretboard to select another note in the current beat.

All of this is covered in more detail in our updated help page. Thanks to the folks who sent us feedback to help guide these changes!

This one’s for people in the Teacher plan.

Previously, on the “Manage students” page for a private course, you could add students via email address — but it required the email address to already exist in our system. If you tried to add an email that didn’t yet have a Soundslice account, you’d see an error message.

First, we added a dedicated page for each of your students, listing all of the private courses they’re in, plus all of the slices you’ve shared with them personally. (See our separate blog post about the new individual sharing feature.)

Second, we added a way to remove students directly via your students page. This is much faster than removing the student from each individual course or slice.

We’ve updated the visual design of the slice manager — the page where we list all of the slices you’ve created.

The new design has explicit links for “Edit” and “Practice.” We’d found that some people thought it was only possible to open slices in edit mode — with all of the editor tools taking up valuable screen space — so we’ve provided clear, separate links to both views now:

To help guide your eyes to the right place, we’ve redesigned the slice and folder icons to be more subtle, and to add more color to the page.

We’ve also tweaked the filters at the top of your slice manager:

The “Shared privately” filter is brand new. It lets you quickly find all of your slices that you’ve shared privately — either in a private course or with individual people.

The “Secret link enabled” filter is also new, but in name only. This filter used to be called “Shareable,” but that turned out to be a confusing name, given we now support private sharing with individual people — a totally different thing. Hence the new name: secret links.

And regarding secret links, we’ve also changed our editor to use this term, in the slice privacy settings menu. The menu now looks like this: 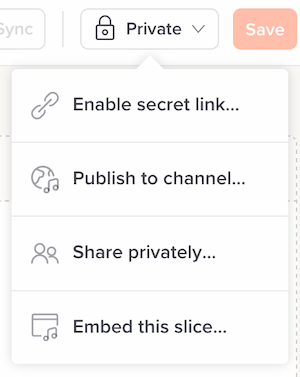 “Add to course” is now “Share privately,” as the sharing options in that menu option have expanded.

This one is subtle, but it affects anybody and everybody using our player. We’ve changed our playhead’s behavior at the start of a bar.

Previously, our playback engine treated the barline as the start of the bar. This meant that, during playback, the playhead would touch the barline at the exact moment that the bar’s audio began:

However, this meant we had an inconsistency. For the first note in a bar, the playhead wouldn’t visually touch the notehead until a split second after the note’s audio. This was especially noticeable at slow tempos and in cases where a bar’s first note had an accidental (hence pushing the note even farther from the barline). For super-duper-beginner students, who rely heavily on the playhead position to know when a note is played, this caused confusion.

Hence, we’ve changed our playhead positioning so that this is no longer an issue. The Soundslice playhead will now always intersect with a notehead at the exact moment that note is played in the audio — even for the first note in a bar:

Some other fixes we’ve made recently, in no particular order:

romaric
Very good. Please I need write in soundslice editor note name but with do re mi fa sol la si do. Can you do the same s English note name please ?