Please correct the errors below.
Blog > Count-in before playback

Previously, whenever you pressed Play in a Soundslice score, it would immediately play the music. Now, you have the option of specifying a count-in before the playback starts.

This is useful if you’re using Soundslice to play along with a recording. It gives you a few moments to get your instrument ready, and hear the tempo, as opposed to immediately jumping into the music.

Activate the count-in by clicking the new arrow icon next to the Play button: 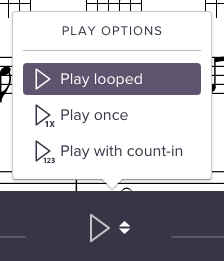 You may be wondering: what tempo does the count-in use? We’re doing a nice bit of magic there — it uses whatever the tempo of the recording is, at the moment at which your playhead is set. This means it does the right thing in case of tempo variations and recordings that weren’t recorded with click tracks. (Behind the scenes, it uses Soundslice syncpoint data.)

We’ve also added a “Play once” option, which several people have requested. If you’ve created a selection by dragging over notation, our default behavior is to repeat the given bit of audio infinitely. But sometimes, especially for particularly short passages, looping can be more confusing than helpful. The “Play once” option tells Soundslice not to loop audio in your selection.

Finally, as a part of this, we’ve changed our metronome sound to be significantly louder. A bunch of Soundslice users had written us saying the previous metronome was too soft.

jshep
Hi, I've noticed an 'anomoly' with count-in before playback. When a selection in the middle of a score is started, there is a count-in, then the selection plays on repeat with no count-in for the repeats. However, when the selection includes the final bar of the score, the count-in is done for every repeat.

I actually have a recollection of using count-in where there was a count-in for every repeat, even when the last bar was not included. If that was the case in the past (I'm doubtful now), it is not the current behavior.

In my current approach to practice, a count-in for every repeat would be ideal. I can see where others might prefer the count-in only for the first repeat.

Is this by any chance something that could be a choice for the user? If not selectable, I plead for the count-in for every repeat! :-)