Every score now has a “Waveform” view, which shows you a waveform of the audio/video. To activate it, open the “Visualizations” menu when you’re looking at a score, and select Waveform. (It’s the same menu that has the fretboard and keyboard views — formerly known as the “Instruments” menu.) 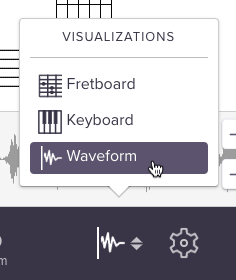 The waveform is useful for visual navigation of your audio. You can click anywhere in the waveform to seek to that moment in the audio, and you can drag across the waveform to create a loopable area. Zoom in/out with the icons at right. If you’ve used our syncpoint editor, this will look familiar. :-)

Note that waveform data isn’t always available. We might not have waveform data for a recording if its type is “Video URL.” And we don’t display waveforms if you use our synthetic audio player. Otherwise, all new Soundslice scores should have it automatically. Feel free to play with it in our example score.

If you license Soundslice to embed it in your own site, you can disable the waveform view with the new enable_waveform=0 URL parameter.

For those of you who upload video files directly to Soundslice: we now accept many more video formats, and we transcode to the appropriate web-friendly format automatically. Previously, we only supported MP4 uploads. Much better now!