Please correct the errors below.
Blog > New editor features, May 28

We’ve made several improvements to our notation editor this week, most notably a redesigned “live editing” view. Here’s an overview.

One of the improvements in our recent redesign was direct feedback in text editing. Now we’ve made it even better.

First, we’ve redesigned it so that the text entry happens in the left sidebar. Previously, the text interface appeared in the notation area, and there was a chance it would appear on top of the notation you were currently editing. Now there’s no chance of that happening.

Second, this text-editing interface persists if you select another note. This makes editing (or deleting) text much faster, because you don’t have to re-open the text interface each time.

Third, we’ve made the text box bigger, to accommodate longer text. You can also make it even bigger by dragging the corner (depending on your web browser).

Fourth, we’ve made this live editing available for more types of notations:

In each case, you now get immediate feedback in the notation as you type, and the interface persists so it’s quick to edit multiple notes subsequently.

In our redesign, we launched the ability to customize tuning for tablature. Now, you can change tuning for existing tracks.

This is a bit trickier than setting tuning for a new track — because you need to specify how to treat the existing tab data. In this case, we’ve introduced a “Recalculate tab for existing notes” checkbox:

Previously, if you wanted to delete a track, you’d need to open the Tracks menu, click the track, then click “Delete track” at bottom right. Now, there’s a delete button directly in the Tracks menu: 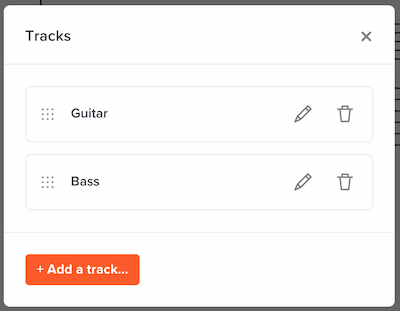 If you delete a track by mistake, no big deal — just hit Control+Z to undo.

One of our favorite features of our redesign is the section at the top of the interface that displays all notations that apply to your currently selected note. This makes it really easy to change or remove those particular notations. 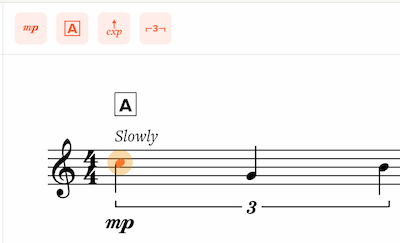 Now, we’ve made that “Current” section even more powerful. It now applies to all selected notes, so you can make changes en masse. (Previously, if you had multiple notes selected, the Current section was disabled.)

Another improvement to “Current”: It now refreshes immediately when you enter new notation. Previously it only refreshed when you selected a new note.

Back in March, we improved the two main types of text in our system — “Text” and “Expression text” — to basically work the same way. Now, as a final step to clarify this, we’ve renamed them to “Inner text” and “Outer text.”

This is much better naming, given that you can use inner text for much more than expressions.

They both work the same as before; the only change is in how we refer to them.

If you’re editing tablature with a capo or shifted tuning, our editor’s “Concert pitch” button will now work more intuitively. We’ll no longer show the button if you’ve unchecked “Ignore capo in notation” or “Ignore tuning shift in notation.” And if you’ve left those options checked, the button will do the right thing.

Previously, our editor loaded every one of its (many) features as soon as you opened it. Now, certain editor features aren’t loaded by your browser until the first time you actually use them.

After all, if you’re using Soundslice to edit a choral score, there’s no need for your web browser to load our code for changing guitar tuning!

As a result, our editor is even faster to load. This is an approach called “lazy loading,” and we’re planning to do this for more parts of our editor and player over time.

caustin555
Nice work. Thank you for the update!

DonCarlos
Will there be time for better editing of LYRICS?
I've now tested most of the notation editors and the insertion method, as Guitar Pro does, so pasting the whole chorus lyrics and dividing its words under the notes with a pause character is ingenious.

Maybe they have a patent for it? Then other delimiters like ";" or a simple space or underscore "_"

soundslice
Stay tuned — we have some improvements coming for lyrics entry very soon!