Posted by Adrian Holovaty on September 8, 2014

Today we’ve launched some nice features for transposing instruments, such as clarinets and various horn instruments.

What are transposing instruments?

If you’re an amateur musician — say, a guitarist or pianist who just plays for fun — you might not have come across this somewhat-confusing concept. Here’s a quick primer.

A transposing instrument is an instrument whose music is notated at a pitch different from the pitch that actually sounds (source: Wikipedia article).

For example, if a clarinetist performs the following notation...

...then the pitch of the resulting sound will be the same as if a pianist performed this:

There are many different types of clarinet, and though they use the same fingerings, the resulting pitches are different depending on the instrument. If you played a certain scale on one clarinet, then did the exact same thing (the same movement of your fingers) on another type of clarinet, you’d still get the same type of scale, but it would be in a different key.

That’s because clarinets come in different keys. The most common type of clarinet is in B♭ (the example above assumed the clarinet was in B♭), but they also come in E♭, A, and other keys. If you play a basic scale on a B♭ clarinet, it will sound as a B♭ scale in concert pitch. If you make the same movement of fingers on an E♭ clarinet, you’ll get an E♭ scale in concert pitch.

This puts the burden on the composer or arranger to make sure the music notation is properly transposed. Which brings us to the new Soundslice features.

Starting today, if you click a track name to the left of any Soundslice notation, you’ll see a new “Instrument transposition” section: 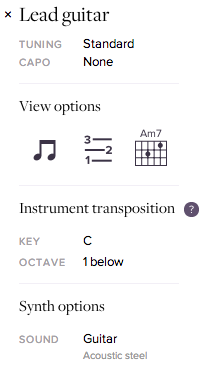 Here, you’ll see two options: key and octave. These specify the key that your instrument is in, if it’s a transposing instrument. In other words, it’s the pitch that the audience would hear if you played a notated C natural note on your instrument.

You can change the key by clicking it, and the notation will instantly be transposed to take it into account. Key signatures, accidentals and note locations will all be updated accordingly, in real time. No need to reload the page, no need to purchase another version of sheet music just for your type of transposing instrument — it transposes automatically.

The octave option lets you shift the notation up and down by octave. For example, guitar music is generally notated an octave higher than sounded.

Let me give you a quick video walkthrough:

Here are three specific use cases for this new feature:

1. You’re a clarinetist who wants to learn to play a melody that’s available on Soundslice but has been notated for guitar or piano. Just use the controls to transpose the notation into the key of your clarinet.

2. You’re a guitarist who wants to learn the clarinet solos from Gonzalo Bergara’s Djangophonic album. Use the controls to transpose the clarinet notation into C, from B♭.

3. You’re a clarinetist who wants to learn the clarinet solos from Djangophonic, but you play a C clarinet instead of a B♭ clarinet. Use the controls to transpose.