We have lots of new Soundslice improvements to share with you today. The biggest news: we’ve launched a new speed-changing interface and a way to share scores across your organization.

Changing playback speed has always been an integral part of Soundslice. But due to the variety of audio/video sources Soundslice supports, we’ve had a variety of slowdown interfaces:

These differences have been tricky to maintain, and they’ve caused some confusion with some of our customers. What’s more, our “slider” interface required a bit too much precision on smaller screens and touch devices. And some of you have (rightfully so) been asking for slower minimum speeds and faster maximum speeds — something we were hesitant to do because it would complicate the interface even more!

All those problems are solved today, with our new interface:

Use the up and down arrows to quickly change speed. For fine-grained precision, click (or tap) the number in the middle and enter whatever speed you want. That’s it.

As part of this, we’ve increased the maximum supported speed for our synth player from 125% to 300% — and decreased the minimum speed from 25% to 10%.

And if you want to practice faster, you’ll appreciate that we now support 125%, 150% and 200% speeds for YouTube videos.

Do you use Soundslice with other people in your company/school/group, sharing a single Soundslice login across multiple people? We’re here to help.

Instead of sharing passwords, you can use our new organizations feature. With it, you can share scores across Soundslice accounts, and easily switch between them: 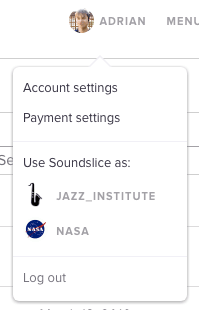 For more, see our new documentation. Note that this is only available for our licensing customers at the moment. If you’re interested in using it, please get in touch!

As always, we make daily improvements to all aspects of our product. Some highlights:

Thanks for using our site, and please get in touch with feedback, as always!