This feature is limited to customers in a paid plan.

To view the version history of your slice, edit the slice and click the Versions icon at upper right.

This will display the versions panel, which looks like this: 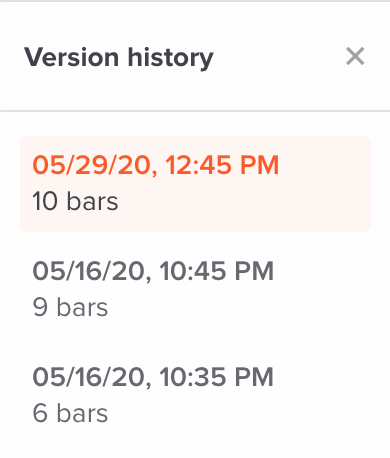 You’ll see a record here corresponding to each time you saved your slice. For each version, you’ll see:

Click on any of those versions, and your slice’s notation will immediately be updated to that version’s notation — allowing you to see the slice as of that version.

Careful, though. If you hit save while viewing a previous version, that version of the notation will become the latest version. (Your previous work will likely still be available in the version history if you’d previously saved it.)

Reverting to a previous version

Let’s say you accidentally deleted some notation and saved your slice before realizing your mistake. Here’s how you can revert to the previously saved version:

If I don’t have a paid plan, is my version history still saved?

Yes. We’ll still store all the versions of your slices. You just won’t be able to access the version history unless you have a paid account.

Does the version history include recordings and syncpoints?

No. The version history is only for your slice’s notation data — not its recordings or syncpoints.

Is version history accessible to anybody who has permission to view my slice?

No. Version history is only accessible to you, the slice owner.

Can I give students access to previous versions of my slice?

No. Version history is intended for your own private use, essentially as a “backup” of your work. This feature isn’t intended to be used in other ways.

Why don’t I see the “Versions” button when editing my slice?

Chances are you’ve just created your slice and haven’t saved it yet. We don’t display the “Versions” button until the first saved version has been created.