Please correct the errors below.
Blog > Introducing our player redesign

Posted by Adrian Holovaty on September 1, 2022

Today we’ve launched the latest iteration in the design of the Soundslice player — with new functionality, a more approachable design and a fresh aesthetic. 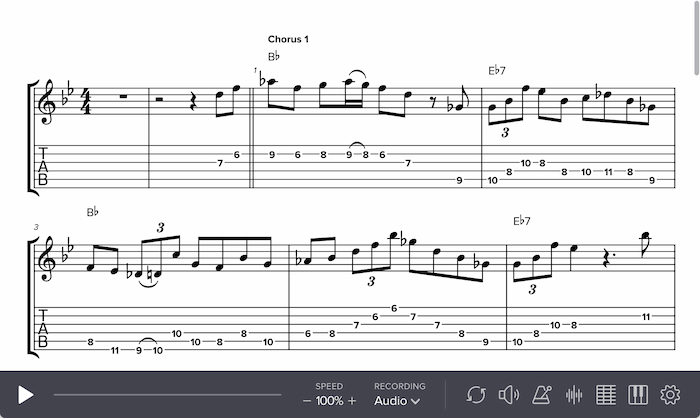 And the new design: 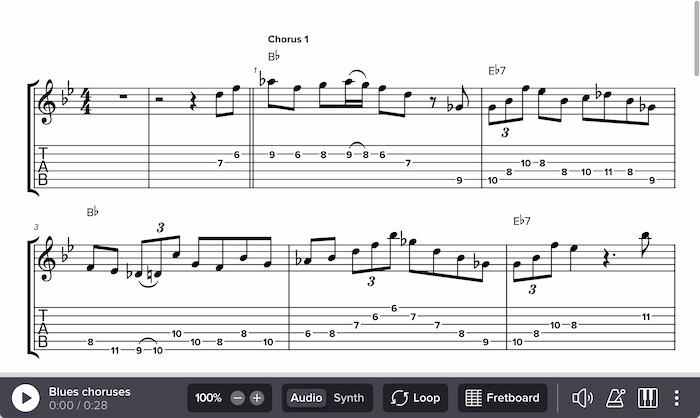 We last redesigned our player three years ago. This design has served us well, but after listening to years’ worth of feedback, we were motivated to make three broad changes:

Let’s dive into the specific changes...

The progressbar (the thing you can “scrub” to quickly move to a certain moment of music) now lives on top of the controlbar. This is significantly wider than before, meaning it’s easier to scrub with more granularity/control.

This is especially improved on mobile devices, where the previous design used a laughably small progressbar in some cases.

This in turn allowed us to make space for...

Clearer buttons for looping and visualizations

Looping is such a fundamental Soundslice feature that we wanted to make it super obvious. Previously, the Loop button was a simple icon; now we include the text “Loop” — conveniently also making the button’s clickable area bigger.

As always, you can still just drag across your notation to make a loop, but this bigger button should make it more obvious to newer users.

Similarly, we expanded the instrument visualization button, adding the text “Fretboard” (or “Keyboard,” “Violin,” “Trombone” or “Trumpet,” depending on your music).

Faster interface for switching between recordings

Being able to toggle between synthetic playback and video/audio recordings is one of the best Soundslice features. But in our previous design, it was hidden enough that some people didn’t even realize it was possible. And even if you knew it was possible, it took a few too many clicks:

Now, it’s a breeze. In the common case — a slice with synthetic playback and a single recording — both options are clearly displayed in the controlbar, and you can switch between them in a single click:

This is especially useful during transcribing.

If a slice has multiple recordings, we’ll always display “Synth” (unless you’ve disabled it) and the last-used recording. If you click the recording name, you’ll be able to choose a different one: 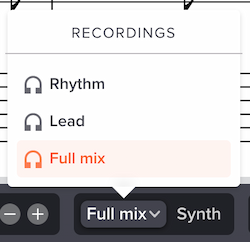 Previously, if you clicked the metronome icon in the controlbar, it would toggle our metronome on or off — and that was it. 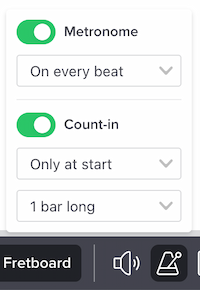 A bunch of things are new here:

As a reminder, our metronome plays back on top of your audio — even on real recordings, in which case we use your syncpoint data to determine the metronome hits. Sweet!

Being able to customize your notation — say, hiding lyrics, adding stems to tablature or soloing a part — is a core Soundslice feature. Here’s what the Settings section used to look like: 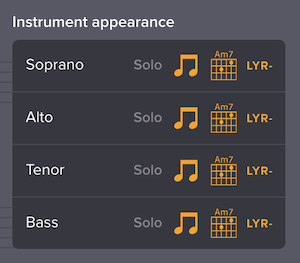 Each of those little icons would let you toggle a specific aspect of notation for a specific instrument. But this felt a bit too granular — few (if any?) people actually need to be able to hide fingerings for one instrument while keeping them for another.

It’s much more natural to think of this as two separate areas: the types of notations, and the instruments. Our redesign makes that split clear: 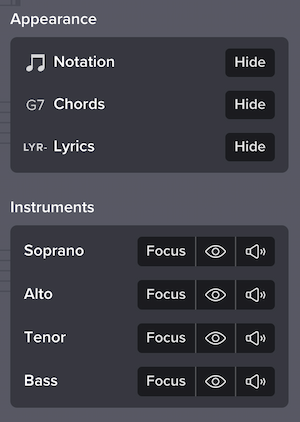 Here, you can quickly toggle off all lyrics, all chords, all tablature, all drum sticking, etc. And you can hide any instrument with a single click — instead of having to realize you needed to hide the individual notations for that instrument one-by-one.

As a bonus, this change allowed us to move the “Show pitch names” feature into this area — which feels much more integrated. Previously it was a lonely checkbox floating on its own.

Previously, when viewing a slice on a small screen, we automatically calculated which buttons wouldn’t fit on the screen, and we put them into a separate menu:

This led to an awkward situation if you wanted to open Settings. First you had to open this intermediary menu, then you had to click Settings. It just felt like a hassle.

Now, we’ve removed that intermediary menu and changed Settings to perform that function. So if you’re on a small screen and we’ve run out of space for all the icons, we’ll move them into Settings. Here, for example, we’ve moved the Volume button into Settings, along with the two instrument visualizations: 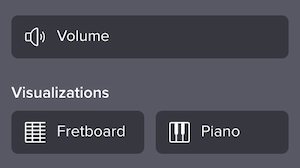 To better communicate this, we’ve changed the icon for Settings to three dots, instead of the former gear icon. A side benefit: we were using the gear icon in another place to mean a different thing (in our editor, to edit slice settings), so now the icon no longer does double-duty.

Relatedly, we’ve optimized the speed and recording-switcher interfaces to be easier to understand on small screens. Previously they used icons that weren’t as clear as they could be, and now they use a smaller version of the “full” interface: 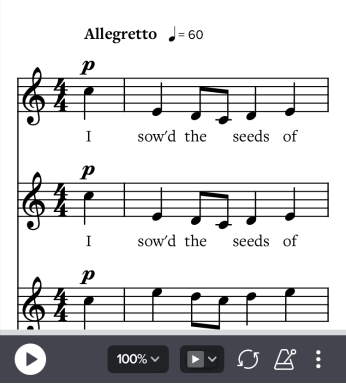 If you embed Soundslice in your own website/app via our Licensing plan, please note that your embeds aren’t using this redesign yet.

That’s because, for big player changes like this, we have a policy of giving our embed customers a month’s notice, rather than taking you by surprise. This gives you a chance to update any help files, screenshots or other documentation if you choose.

We’ll be making the redesign live on all embeds in one month — October 1. At that point the new_design=1 URL parameter will no longer be necessary, and all of your embeds will magically change to use the new design with no effort needed on your part.

We hope you like these changes, and we hope you continue to send feedback to help guide what we work on. Thanks, and let us know what you think!

OpenSauceGuitar
It's looking nice but I have existing songs with multiple tracks where I cant find a way to view any tracks that were set to hidden prior to the update. Any ideas? Thanks.

soundslice
We fixed a bug a day or so after this launched — I think it's fixed for you now? If not, could you email the specific slice URL(s) to us?

LeeNichols
Looking good but one feature I am desperate for, both in the view and edit mode - disable scroll completely and absolutely, just a simple toggle. This is the single biggest annoyance in Soundslice, especially when editing.

soundslice
Are you looking to disable "Keep the playhead at top of screen" (www.soundslice.com/help…)? If not could you give more details about how you'd like the scrolling to work 🙌

LeeNichols
For view mode the biggest problem is when looping. Everything is perfectly in view but nothing will make the screen stay still, there are many instances where it's like trying to read a moving target.
In edit mode it's just a nightmare - when editing (adding or deleting notes) in a bar at the end of a stave, the bar resizes which forces autoscroll, it's like trying to edit whac-a-mole :).
Autoscroll has it's uses but I'd rather it just have a simple on / off button that disables it completely.

DIreland02
Hi, I like the easier toggle between recording and Synth sound as I can more readily check I have notated any tricky timings correctly.
I am experiencing an issue with the "Appearance" function. For a transcription where my last use before this update was with tablature hidden, I am no longer able to turn tablature visibility back on. It's there as an option but selecting it doesn't do anything.
I can still toggle notation/chords between visible and hidden.

DIreland02
Thanks, I managed to get that. I didn't know that functionality was within the instrument dialogue having previously just used the settings dialogue to switch tabs on/off.

I like how, in practice mode, it remembers the speed you last had set. Can you also have it remember your preferences around which tracks to have visible? e.g. I'm trying to work on my reading, so I like having the tab turned off. Would be more convenient if I can just run through my practice list at a click, rather than having to turn off the tab for each slice.

johnnyonguitar
Thanks for the great stuff. May I suggest adding an option in search engine to display matches in slice descriptions? Now it only show matches in names.