With our speed training feature, you can tell our player to increase the playback speed by a certain amount each time through a loop.

For example, you can specify “Play this loop starting at 50% speed and ending at 100% speed. Increase the speed by 5% after every two loop cycles.” If you’re using synthetic playback, it uses BPMs instead of percentages.

This is a great practice tool, helping you ease gently from comfortable speeds to more challenging ones. And it works with any music in our system, whether real audio, video or synthetic playback.

To begin speed training, view any piece of music in Soundslice and click the speed interface at the bottom of the screen, then choose “Speed training…” It looks like this:

You’ll see a menu that lets you set the speed training parameters: 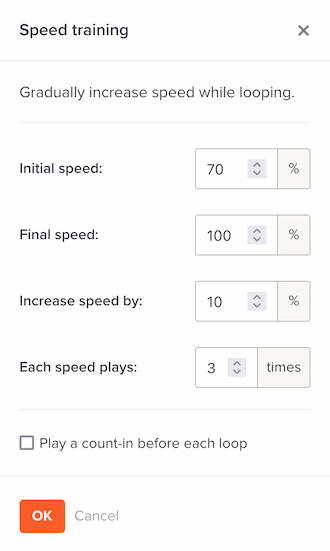 If synthetic playback is currently active, these values will be BPMs (beats per minute). Otherwise, they’ll be percentages, where 100% means the original speed of the recording.

After you’ve entered your parameters, just press Play to start the speed training. While speed training is active, we’ll add a little arrow to the speed controls, so that you know it’s active:

Here is a small example, to help you understand exactly what happens for given parameters:

With these settings, playback starts at 50% speed and ends at 100% speed. Each speed is played four times, then speed increments by 10%.

Using speed training without a loop

Speed training is mostly intended to be used with a loop. But that’s not strictly necessary!

If you don’t have an active loop, you can still use speed training; we’ll merely treat the entire slice as one big loop. (Tip: You might also enjoy focus mode, which lets you crop the visible music on your screen.)

If you pause playback during speed training, we’ll keep your place within the training session. That is, if you’ve already done 10 repetitions, you’ll pick up right at repetition 11 rather than starting from scratch.

Speed training works seamlessly with our metronome count-in feature. Just check the checkbox next to “Play a count-in before each loop” when setting up your speed training.

This count-in will use the tempo of the upcoming iteration, to prepare you for the tempo change.

Is it possible to make the speed increment downward, i.e. getting slower?

Not at this time. If you’re interested in this, let us know!

Is it possible to save my commonly used speed training parameters?

Not at this time. If you’re interested in this, let us know how you’d like to use it — would you want global saved settings, or per-slice saved settings? Or both?