Here’s how to work with chord names and diagrams using the Soundslice editor.

To edit an existing chord, just click on it. The chord-entry interface will appear at left, and you can make changes.

If your instrument has tablature enabled, your chords can optionally include chord diagrams. These diagrams will always use the same number of strings as in your tablature.

If you create a chord above a beat that has at least three notes already entered, we’ll automatically pull those notes into the chord diagram when you open the chord-entry interface. You can change the auto-generated diagram by typing in or removing the fret numbers that appear beneath the chord name.

You can also just add the chord name and type in the frets manually:

For chords that are played up the neck, we automatically determine which fret number to display on the left. It’s the fret number of the lowest fretted string in the chord. For example, here it’s 8: 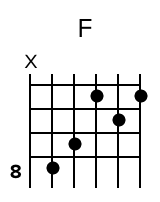 At the moment, there’s no way to change this.

How do I put more than one chord over a sustained note or rest?

Right now, every chord in Soundslice needs to be entered over a note or rest. This is something we’d like to improve in the future. But in the meantime, here’s a trick to achieve chord display like you see in the above image:

1. Create a new instrument for your chords. If you want to use chord diagrams, make sure your instrument has tab enabled, with the appropriate number of strings; otherwise, use type “Generic treble clef.”

2. Move the new instrument above your existing instrument.

3. Enter your chords, creating rests as necessary to get the right rhythmic position.

4. In the instrument’s settings, hide the notation to leave only the chords.

Can I use the ‘text above’ feature to add chord names?

You can, but we don’t recommend it. If you use the proper “chord” feature as opposed to “text,” then Soundslice will automatically give you some cool features. Anybody viewing your slice will be able to:

Put simply: If Soundslice knows that a given piece of information is a chord, it can do more interesting things.

Can I mix and match chords-with-diagrams and chords-without-diagrams within a single instrument?

How can I use sharp or flat symbols in chord names?

Use the lowercase B and pound signs symbols when entering the chord name. Our system will automatically convert the following:

For example, to write the chord B♭ (B flat), write “Bb” (a capital B followed by a lowercase B).

Can I change the font used in chord names?

Not at this time. This is on our to-do list.

Can I use fancy superscript/subscript stuff in chord names?

Not at this time. This is on our to-do list.